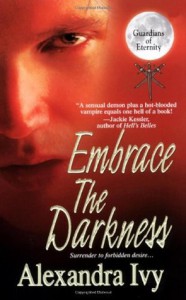 Shay, is half human and half shallot, and as such she is highly prized. With the witches dead, she has been returned back to the troll, who holds the curse over her. A curse that has kept her a slave for years…she aches to be free and live her own life, which has been taken from her because of the potent blood she carries. When she goes on auction, her new buyer, is the one vampire that is her weakness…Viper. Viper is drawn to Shay, and wants her, so he buys her, hoping to repay the debt when she saved his life. But Viper and Shay are drawn into a game of death and danger, there is an enemy out there, that needs Shay to survive, and Viper will do everything in his power to save her no matter what the cost to himself. But their enemy knows Viper, knows his strengths and weaknesses, and soon it will take Viper, Shay, their friends and even a crazy gargoyle to survive the coming tide..

Viper, is a vampire chief, a vampire that is charismatic and easy-going, lover of women of all kinds, and see the beauty of Shay. He adores her, and he knows that he will do anything to keep her safe. Viper has dedicated centuries of his life to becoming who he is. Viper is a character we fall in love with in the first book. We see him as a vampire leader, that is commanding and has his own “harem” of women. He doesn’t lack for sex in any time frame…he is sexy and quick-witted, and knows how to have a good time. What was wonderful about Viper is that he is way deeper than you see in the first book. He cares about his people and the humans, he treats Shay as a woman with intelligence rather than a slave. I love the way he is with her, so engaging and consuming, and his character is everything you want to see in a alpha….but a alpha that knows how to play and have fun, and can work a good weapon in his hands….everything you need.

Shay, with her mother being human and her father being Shallot, she has always been highly prized because of her “blood”. For a long while, she had a curse set on her, and this curse a certain greedy troll controls. She has lost both of her parents, but her father whom she adored was killed for his blood. Shay is drawn into a world where she is hunted  and only Viper is strong enough to protect her. Shay was a heroine that is still strong-willed despite how she has been treated. Being treated and sold as a slave hasn’t broken her, only made her stronger. I loved her resilience and tenacity to keep fighting, no matter what.

Embrace The Darkness is the second installment in the series, and it continues off from where the last one ended. This is Vipers story, and what a character he was. What was most fascinating about this story, was seeing Shay and Viper come together. It wasn’t how I expected it to be, so I loved not being able to predict what will happen next (tends to happen in a few paranormals), but what was most fun was the fun and silly bantering between these two. It was quite engaging and will give you giggle and laughs, because these two are a great pair…whether they are fighting enemies or making love…they have a certain connection that is almost harmonious. They equal each other out, and it was very satisfying seeing the balance of their relationship form and become cemented. The supporting cast was quite fun, we get the mini gargoyle, who is three feet tall and loves goading Viper. Then of course we get Dante and Abby and see a bit more of them, which was fun seeing them together after the previous book. The villain of the story isn’t what he appears to be, and I really liked the twist at the end, and seeing a character that appears to be bad who is really more misguided through loyalty….love the way the story climaxes and ends because it leaves you wanting to read the next book right away.

Even though this isn’t my favorite cover of the series…I do love the red tints in the cover, and those eyes!! Love em’

Embrace The Darkness is a stunning installment from this author…a story to entice, an edgy vampire romance to give you thrills and chills…a story that gives you a perfect blend of spicy romance, engaging characters, and dangerous villains right around the corner!! MAGNIFICENT